As we noted last week, the Board of the Directors and “Futures Committee” squeezed 26 meetings on Capitol Hill into a day and an half.  While the schedule was exhausting, we had some terrific meetings with key members. 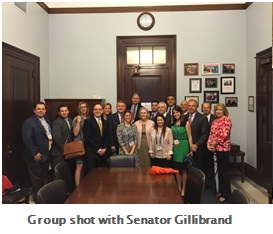 We visited with both U.S. Senators from New York.  Our first meeting with Senator Chuck Schumer, who is now the Senate Minority Leader, was very productive.  We also had a terrific meeting with Senator Kirsten Gillibrand.  They confirmed their staunch opposition to changing the current rules regarding the deductibility of advertising.  Senator Schumer promised to continue his efforts to eradicate pirate stations from New York.  We spent time discussing the upcoming TV channel repacking problem.  We emphasized that this is not only a TV problem.  Because there are a number of radio stations on TV towers, repacking construction could affect radio stations located on these towers.  Both Senators committed to keeping track of this issue to make sure New Yorkers do not lose service. 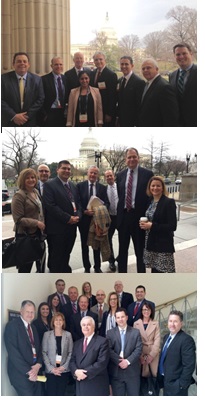 In addition to meeting with our Senators, we met with 24 members of the House Congressional delegation.  On the issue of advertising deductibility, we had positive responses from both Republican and Democratic members of Congress.  Of course we must remain vigilant on this issue, as tax reform is a top priority for Congress and the President.  We urged members to sign on to a letter co-sponsored by NY Congressman Eliot Engel that opposes any changes to the deductibility of advertising.

We also urged our members of Congress to support the Local Radio Freedom Act (H.Con. Res. 13).  We expect the music industry to begin its big push in a few weeks to create a new performance fee.  The addition of a new performance fee would be devastating to many local radio stations.

The impact of TV repacking was discussed at length.  We noted that the proposed 39 month construction deadline was not realistic and that the $1.75 billion allocated by Congress was insufficient.

They did a fantastic job representing you on Capitol Hill.